Damray | Home| Information & Guidelines| Editorial Board | About Us

The autism spectrum disorder (ASD) is a common mental disorder in children. The etiology of this disease remains unclear. The studies show that the genetic and environmental factors play an important role in the pathogenesis of the disease. Epigenetic modification plays an important role in the process of gene and environment interaction. As the most common epigenetic modification, DNA methylation is becoming gradually a hot research topic of ASD etiology in recent years.

Autism spectrum disorder (ASD) is a common neurodevelopmental disorder in children psychiatry. The etiology and pathogenesis of the ASD is still unknown. Studies show that the genetic factors and environmental factors played an important role[1]. Epigenetics, as a mediator of gene and environmental interaction, is gradually becoming a new hot research topic in the study of mental diseases. The epigenetic studies can provide a new perspective to the study of ASD etiology and explore the mechanism of gene and environmental interaction.

DNA methylation is a common form of epigenetic modifications and also the most studied epigenetic modification. It refers to that the methyl is transferred to a specific base under the catalysis of DNA methyltransferase. The most common way is to convert the cytosine at CpG site to 5-methylcytosine. The change of DNA methylation status can affect the chromatin structure, DNA stability, and interactions between DNA and protein, so as to regulate the gene expression.

Severe neurodevelopmental disorders Prader-Willi syndrome and Angelman syndrome are closely associated with abnormalities of DNA methylation[3]. It is noteworthy that the clinical manifestations of Prader-Willi and Angelman syndromes include the backward speeches and mental development and autism-like symptoms. Gene defect of DNA methylatransferase 3 (DNMT3), a key enzyme in DNA methylation, will lead to the mental retardation[4]. Methyl CpG binding protein 2 genes can bind to the methylated DNA to thus regulate the expression of multiple genes. The mutation of methyl CpG binding protein 2 (MECP2) genes will result in Rett syndrome, and the repetition of MECP2 genes will result in MECP2 syndrome. The clinical manifestations of Rett syndrome and MECP2 syndrome all include mental retardation, epilepsy, and autism-like symptoms[5]. All of these suggest that abnormalities of DNA methylation may be associated with the autism. 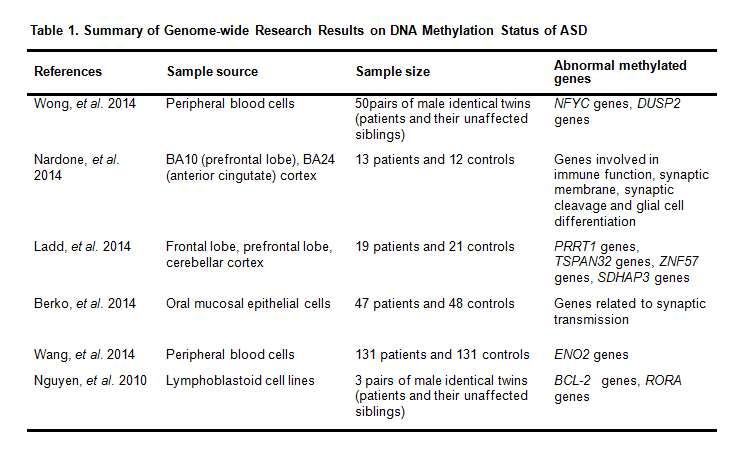 The etiology and pathogenesis of autism spectrum disorder (ASD) remains unknown. The previous studies showed that the genetic factors and environmental factors played an equally important role in the pathogenesis of the ASD. The mechanism of gene-environment interaction remains unclear. We hypothesized that the possible mechanism was that the genetic factors made the individuals susceptible to the disease. Under the influence of environmental factors, including environmental factors during pregnancy and postnatal periods, they were interacted to cause the neurodevelopmental abnormalities so as to result in the clinical phenotype of the autism. As a mediator of gene and environmental interaction, epigenetic modification is gradually becoming a hot research topic in the etiology study of autism, which provides a new candidate gene for future genetic research. The genome-wide study showed that the methylation difference was found in genes associated with immune functions in ASD patients, suggesting that the immune factors might play a role in pathogenesis of the ASD, which has also provided indirect evidences for the hypothesis of ASD maternal immunization activation. Future studies can further explore the effect of maternal immunization activation on DNA methylation status at embryonic stage.

This paper was supported by the National Natural Science Foundation of China (grant No. 81541115).

Authors claim no conflict of interests.