Increasing of wheat grain yield by use of a liquid fertilizer

Wheat is a vital crop in Georgia and in the world. Because of the increase in the rate of population growth, improving the grain yield is the way to meet food de-mand. Proper crop nutrition plays a vital role in maintaining the world’s food sup-ply. Fertilizer is essential for accomplishing this.One of the most important means for increasing the wheat yield is fertilizer, especially, organic fertilizer. The present research was carried out to study the effects of different doses (150ml, 200ml and 300 ml on ha) of humic organic fertilizer “Ecorost” on yield of winter wheat cultivar “Tbilisuri 15”. The humic liquid fertilizer "Ecorost" is a peat-based or-ganic-mineral fertilizer. The product is active and saturated due to the use of the latest technology and living bacteria found in peat. The field trials were conducted in 2017-2019 at the Experimental Site of Scientific Research Center of Agricul-ture in Dedopliskharo- arid region (Eastern Georgia).Liquid fertilizer was applied two times: in tillering stage in early spring and two weeks after - in stem elongation stage. Results indicated that the highest wheat grain yield (4t/ha) was achieved when the plants were fertilized with 300 ml on 1 ha ofEcorost. Applications of liquid fertilizer “Ecorost” increased grain yield of winter wheat by 16.2% in comparison with standard nitrogen fertilization. Thus, liquid fertilizer “Ecorost” had a significant effect on wheat grain yield compared to control standard nitrogen fertilizer.

The modern world has made great changes in wheat breeding and as a result, such wheat varieties have been created, the yield of which has reached to 12-15 tons per hectare. In order to increase crop production, wheat crop care measures have been improved and agricultural technological processes have been completely changed. Today, special attention is paid to the adding of nutrients to the plant throughout the growing period. If earlier,the appli-cation of fertilizers have been carried out only before sowing and in spring, according to the modern technology,the application of fertilizers is carried out 5-6 times - at sowing, after germination,in the early spring and so on,until the complete maturing, sometimes,if necessary even more often (1.2). During conducting agricultural measures, plant nutrition from the leaf played a major role. Today, in the markets of Georgia there is a wide range of fertilizers, many of them are successfully used by farmers. Testing new fertilizers and establishing the prospect of their use provides an opportunity to further increase the yield of wheat varieties. Currently, organic fertilizers are of big interest, the demand for which is permanently increasing (1.4).

In Georgia, winter wheat varieties are much higher in yield than spring varieties. The ratio of sown areas is 90% and 10%, respectively. Obtaining and maintaining high winter wheat yields is the main goal of farmers. The potential yield of common production of wheat varieties meets farmers 'demands, but it is very difficult to receive a high yield without the use of modern technologies and fertilizers. It is necessary to create the necessary conditions for high-yield varieties to receive their maximum potential harvest, for this purpose it is necessary to use modern technology and fertilizers.

The new century was marked by new surprises, each country is trying to predict and correctly define plans for the future. The forecasts of influential international organizations are of particular interest, most of their forecasts on crop yields in the future are disappointing. The prospects for cultures closely linked to human existence, without which the future of mankind is impossible, are particularly interesting. One of such important crops is wheat, which, in terms of world production, belongs to the most significant and geographically widespread group of plants. With little exception, the entire population of the world feeds on products made of cereals and is a daily and necessary food for humans. Science has long tried to find a replacement for this food that could be received in laboratory conditions, but the production of such a product is accompanied by such recidivism, which is often impossible to correct. To this is added a sharp change in climatic conditions, which further complicates the situation and the cultivation of each crop cannot be predicted. Scientists try to overcome all obstacles and offer completely new technologies that contribute to receiving high and quality harvest.

In order to study and introduce a new method of wheat care and cultivation in 2017, we conducted preliminary tests - feeding the plant from leaves depending on the timing and doses. Organic fertilizers: Ecorost, Bensabz, Aminokat, Nutrivant were used in the tests.The tests were carried out in crops of winter wheat variety Tbilisuri-15 in two repetitions on the area of 50-50 m2. Feeding of plants from the leaf was carried out in different doses of the preparation twice during the tillering and flowering phases. The purpose of the test was to determine the positive effect of the preparations on the increase in yield.

Table 1. Yield of variety Tbilisuri-15 received as a result of fertilising with organic fertilizers from the leaves

Analysis of the obtained data showed that organic fertilizers had a positive effect on both plant tillering and yield (Table 1). When Bensabz is used, crop growth reaches 26.1% and when Ecorost is used it makes 22.6%. Taking into account the fact that the fertilizer Bensabz was not registered in the country, therefore further tests was continued with the humic fertilizer -Ecorost. The advantage of Ecorost over ammonium nitrate is as follows: 1.It is an organic fertilizer that makes it possible to receive biologically pure product and 2. Fertilizer is introduced in liquid form, which activates physiological processes and moisturizes the soil.

The territory of Georgia is characterized by a variety of agroclimatic and soil conditions, so the tests were carried out in two completely different zones. The first-arid zone of Eastern Georgia (Shiraki), where there is produce 45% of the total wheat harvest. Shiraki is a non-irrigated zone, so a significant problem in wheat production is moisture deficiency in the early spring during germination and in the summer during the period of grain formation. However, the positive characteristics of this zone are the presence of large areas of fertile black soil of small and medium thickness. The second zone is Kartli, where alluvial carbonate and meadow brown soils dominate. This zone is provided with irrigation system.

In the experiment was used the local winter wheat variety Tbilisuri-15, which was obtained by hybrid combination by multiple individual selection of thevarieties Tbilisuri-8 and Besostaya-1. The variety belongs to the soft wheat species Triticumaestivum L and a variety of the red seed non-hulled form var. lutescens (Alef.). It is a variety intensive type that uses increased doses of fertilizer.

The tests were carried out in 2018-2019 at the test bases of the research center in Shiraki (municipality of Dedoplistskaro) and in Kartli (municipality of Mtskheta). The variants were located by standard method (4.5) - 3 variants, in 4 replications, the area of each plot is 40 m2.

Tests on the Ecorostwere performed in three variants:

Ammonium nitrate was taken for the standard at the rate of 150-kg/ha.

The study of phenological and biometric indices of wheat varieties was carried out according to the method de-veloped by UPOV.

In wheat growing season,were studied plant’s seed germination, survival, earing, flowering and maturing . It has also been studied their resistance to major wheat diseases: yellow and stem rust, septoriosis, head and powdery mildew. The economic indicators of each variety were studied: plantheight, productive tillering, spike length, spikeletsnumber perspike, seedsnumber perspike, seedsweight perspike and 1000 seedsweight. The yield was de-termined in replications on both the total area and on 1 m2. An average standard deviation, an average standard error and a coefficient of variation were determined to assess the validity of the averages. Statistical analysis of the obtained data was carried out using the program Copstat, by variation analysis (ANOVA).

Wheat growing seasonin 2018-19was characterized by different environmental and climatic conditions, such as the drought and sharp fluctuation of high temperatures. Despite this, according to the data of 2018-19, under the influence of organic fertilizer Ecorost, the economic indicators of the variety did not change dramatically and fully showed the characteristics and properties characteristic of the variety. Plants height of the variety Tbilisi-15 varied within 90.4-104.4 cm; spike length- 7.6-11.1 cm; productive tillering - 1.7-2.5; seeds number perspike - 39.5-45.3; seedsweight perspike - 2.2-3.0 g; 1000 seedsweight - 45.1-47.5 grams.

According to the procedure, three different doses of Ecorost (150 ml, 200 ml, 300 ml) were treated on sowing material and planted in autumn according the sowing terms of two regions of Georgia. According to our data, this treating does not have much effect,but applying of Ecorost by spraying the leaves3 times was quite effective: 1) after germination - as a result, a strong plant and increased tillering was received, 2) in the early spring - at resumption of vegetation–tillering is increased, vegetation is accelerated; 3) at stem elongation–earing period-spraying with Ecorost ensured drought resistance of plants, number of spikes, increase in size of seedsinspike and their fullness.

Disease resistance of plants is one of the most important conditions for increasing yields. When using elevated doses of Ecorost, increased plant resistance to yellow rust was observed. If in the control variant the intensity of yellow rust was 87/60%, this indicator was 73/46% in the second variant and 55/20% in the third one, which was caused by strong plant and active photosynthesis.

In the arid zone of Kakheti, despite severe drought, the introduction of Ecorost in liquid form ensured the moisture preservation in the soil and activation of photosynthesis in plants, which was shown in the yield.

The results of the experiment carried out in 2018-2019 showed that in order to receive wheat high harvest, the use of organic fertilizer Ecorost is perspective, which allows to increase the yield from 16.2% to 22.6%.

The use of fertilizer Ecorost for seed pre-spraying is not necessary, as this does not have significant effect in winter wheat crops.

The applying of Ecorost increases the resistance to rust diseases.

The use of Ecorost fertilizer in the arid zone of Kakheti is particularly effective. 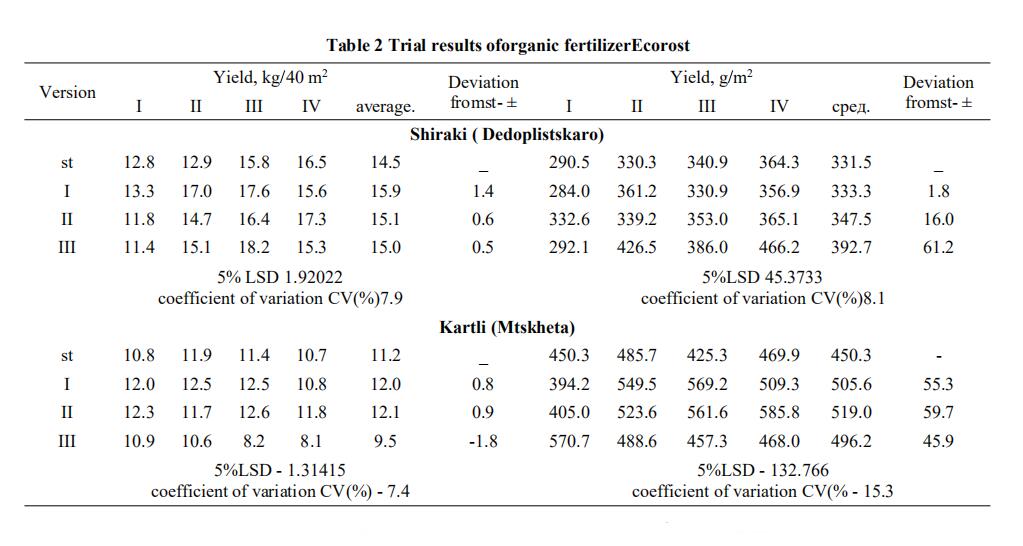 The Institute of Phytopathology and Biodiversity of Batumi Shota Rustaveli State University. The Head of De-partment of Genetics of Resistance. Ph.D. ZoiaSikharulidze