The revision of family Eupterotidae (Bombycoidea) is very less reviewed and studied by various entomologists around the globe. Later, family name was reinstated, synonymized or re-described and remain as a mystery. The purpose of this manuscript is to know about the current status of family Eupterotidae in the present scenario. This paper is providing the review, classification, economic significance of this family along with detailed remarks on two genus namely Eupterote and Apona with special reference to their wing venation and external genitalia of their type species.

Family Eupterotidae was never thoroughly revised and according to [1] the family was not even treated within the “Lepidopteran Cataloge”. Eupterotidae is a small but most diverse group of moths in Africa and Oriental Region [2]. The family name Eupterotidae was given by Swinhoe [3]. However, three older names i.e. Striphnopterygidae Wallengren, Phialidae Wallengren and Janidae Aurivillius were used instead of Eupterotidae. Striphnopterygidae Wallengren has been used as the valid name for the family by many workers. Eupterotidae gained almost universal acceptance as the name of the family since about 1928. Application of Article 35.5, introduced in the current 4th edition of the Code [4], allowed the retention of the name Eupterotidae as the valid family name. No revision has been published except the revisional analysis on generic level by Forbes [5] and some notes by Holloway [2]. The families which are most closely related to Eupterotids are Lemoniidae, Australian Anthelidae, Afrotropical Sabaliidae and American Apatelodidae.

Note on genus Apona Walker: Genus was proposed with cashmirensis Kollar as its type species [17]. This genus was considered under family Lasiocampidae [18]. Later on, this genus under family Eupterotidae [13] and described three species namely cashmirensis Kollar, plumose Moore and shevaroyensis Moore under this genus from India. Instead of placing this genus in recognized subfamilies, and placed under ‘Ganisa group’ along with four other genera viz., Apha Walker, Ganisa Walker, Melanothrix Felder and Pseudojana Hampson [11]. The present genus i.e., Apona Walker completely conforms to the characterization of subfamily Eupterotinae. Hence, in the present studies this genus is placed under subfamily Eupterotinae and its placement is justified. At present, this genus is represented by seven species from the globe [11].

2.2 Key to the studied genera of subfamily Eupterotinae Swinhoe

Diagnosis: Labial palpus slight, upturned or porrect, thickly fringed with scales. Antennae bipectinate, branches very long and slender in the males, shorter in females. Thorax clothed with scales. Forewing broad, outer margin rounded; postmedial line double; discal cell closed; 1A+2A basally forked; M3 from lower angle of cell; M1 from upper angle or stalked with R5, R4 and R3 from upper angle of cell; R2 absent; Sc from base of wing not reaching up to apex. Hindwing with discal cell closed; 1A and 2A present, 2A reaching tornus; M3 from lower angle of cell; M1 and Rs stalked or free; Sc+R1 arising from base of wing, having a bar with discal cell. Legs clothed with scales; foreleg with epiphysis; mid-tibia with one pair and hind-tibia with two pairs of spurs; claws prominent. Abdomen clothed with scales. Male genitalia with bifid uncus, no demarcation from tegumen; gnathos present; valva short and broad; female genitalia with both apophyses long; papilla analis armed with short and long setae (Figure, 7-12). 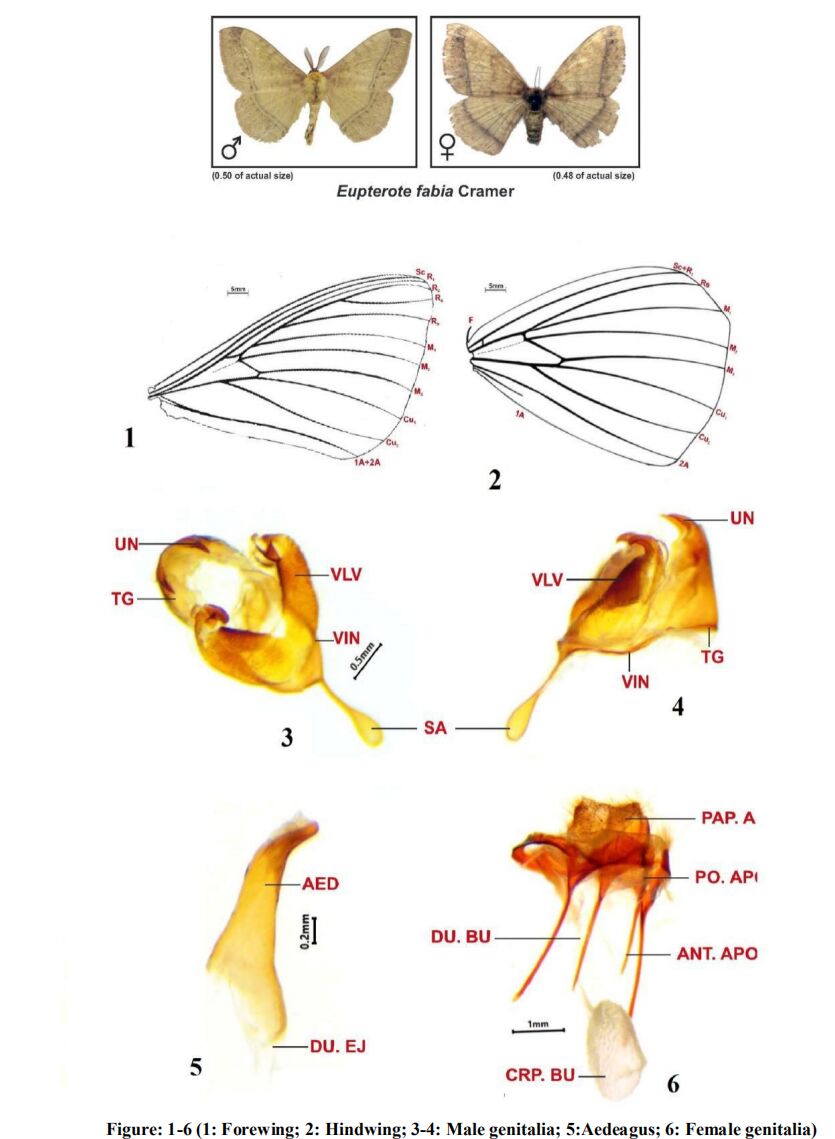 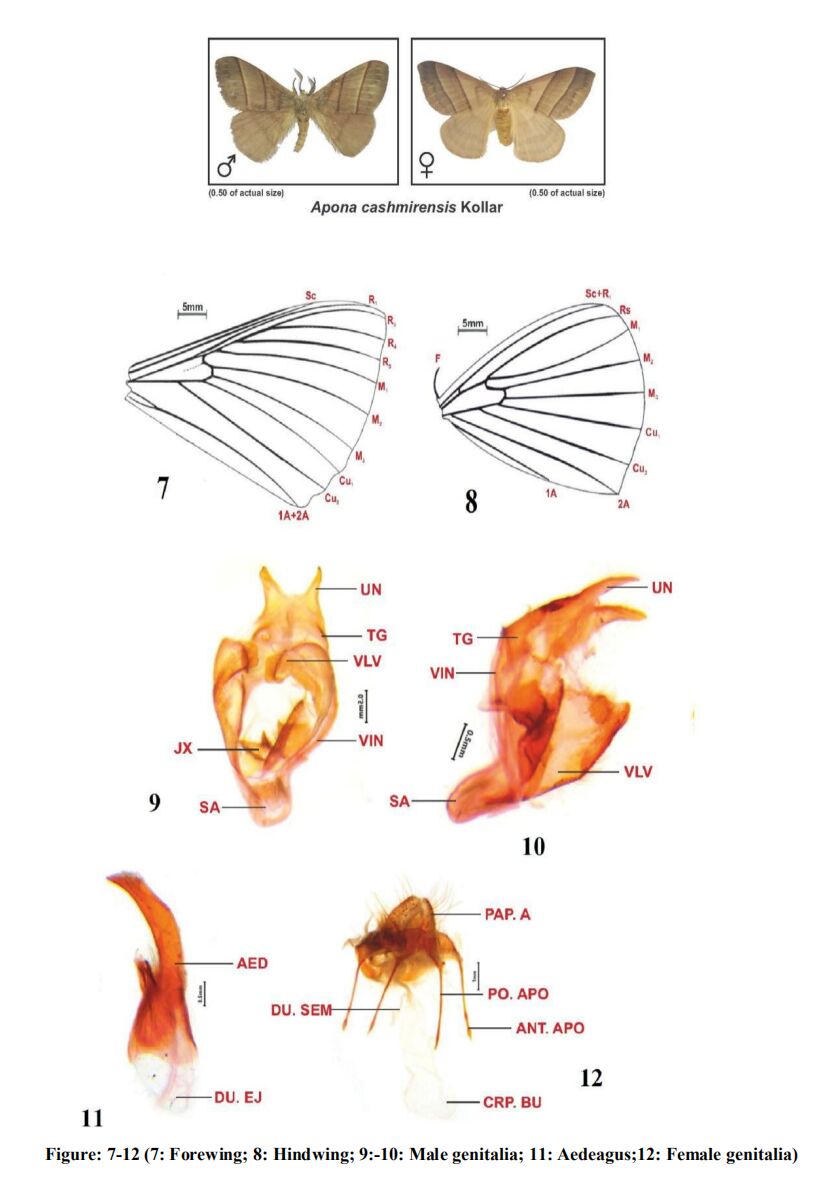 Remarks: It is distinct with respect to the prominent submarginal wavy line on forewing and genitalic characters such as uncus and valva in male genitalia and apophyses and papilla analis in female genitalia.

There is no conflict of interest.